Quintinshill 1915 - The Loss of the Royal Scots

Two overnight sleeping car trains from Euston station, the 11.45pm to Edinburgh and Aberdeen and the midnight to Glasgow, were booked to leave Carlisle at 5.50 and 6.05am respectively, followed by the 6.10 local train to Beattock.

Because the local train connected into an important commuter service from Beattock to Glasgow the authorities tried to keep it to time. If the sleeping car trains were late, the local left to time and was shunted out of the way along the line at Quintinshill or Kirkpatrick. Normally the local would simply be switched into the northbound loop at Quintinshill while the express trains overtook it.

The Quintinshill signalmen worked two principal 10 hour shifts, a relief signalman filling in the remaining four hours, and they were supposed to change shifts at 6am. Both of the men involved lived at Gretna and walked or cycled to work. But it had become regular practice for the day man to use the local train from Gretna if it was likely to be shunted out of the way at Quintinshill.

To avoid being found out, the night signalman would stop filling in the train register, (the book kept as a diary and showing all actions taken in the signal box), at 6am and record on a piece of scrap paper the times that bell signals for train movements were sent and received. The day shift man could copy them into the register in his own handwriting when he arrived to make it look as though he was there at 6am.

On 22 May Signalman Tinsley found out from Gretna Junction that the local train was stopping at Quintinshill. He joined it at Gretna but when the train arrived at Quintinshill the northbound loop line leading towards Glasgow was already occupied by a goods train.

The local train was stopped on the main northbound line and reversed over the crossover on to the southbound main line leading towards Carlisle to leave the northbound line clear for the trains from London to pass. At the same time an empty wagon train was arriving in the southbound loop line so the troop special from Larbert to Liverpool could overtake it.

Signalman Meakin on the night shift handed over to Tinsley who at once started to copy into the train register the times of bell signals made by Meakin. Meakin sat back to read the morning papers brought by Tinsley.
The first of the sleeping car trains from London had been accepted from Gretna as soon as the local train was out of the way. The first sleeper train passed Quintinshill at 06.38.

Both signalman could not recall giving the 'Train out of section' bell signal for the goods train, which they had placed in the southbound loop line, however they must have done so thereby allowing clearing the signals to enable the troop train to be sent forward. Certainly neither sent the bell signal 'Blocking back inside home signal' to Kirkpatrick to protect the local train standing on the southbound main line right outside the signalbox, and facing the oncoming troop train.

Nor had they used a lever collar on the southbound main line home signal lever. These round metal rings would have reminded them not to pull the lever, which put the signal to clear, because of the local train standing on the main line beyond it.

Tinsley not only accepted it but offered it Gretna and cleared the southbound mainline signals - disregarding the local train standing in its way right in front of him. The scene was set for a tragedy.

There was just one more chance of saving the situation. The fireman of the local train was in the signalbox to carry out Rule 55.

Even now, with mechanical signalling on lines without track circuits, Rule 55 or its successor Rule K3 are some of the most important rules in the railway rule book - to remind the signalman of the position of a train.

Certainly the fireman told the signalman, his train was right outside the signalbox window. But he did not check that the signalman had taken steps to protect his train by sending the blocking back bell signal or using the lever collars. The last chance had gone.

The troop train was travelling at about 70mph on the falling grade with all signals clear. Suddenly right in front of it, was the engine of the local train a big Cardean class 4-6-0, No 907. No 121 the engine of the troop train hit the standing locomotive head on with colossal force No 907 was badly damaged, No 121, hauling the troop train, was totally destroyed. The tender of 907 was thrown across the northbound line as too was what remained of 121. On top of all this was a mound of wreckage from the coaches and vans of the troop train, some of which had been thrown right over the two engines.

The two signalmen were aghast. 'What have you done?' called Meakin
Tinsley. 'You've got the Parly standing there.' was referring to the 6.10 local. Parly is an old railway term, dating back to the 1840s, for what were called Parliamentary trains - trains run at Parliament's insistence. 'And where' s the 6.5?'

They rushed to the northbound line signal levers; put them to danger, but it was too late. The night sleeping car express from London, hauled two 4-4-0 locomotives and travelling at 60mph, hit the mound of wreckage and drove 121 's tender through the standing goods train the northbound loop. Live coals from the engines thrown out by the impact, and gas which was escaping from the broken tanks under the old coaches of the troop train, together with the wooden wrecked coaches was to add to the disaster. The wreckage swiftly caught fire and burned right through the day and for much of the following night. Tragically, if they could not escape, those who were not killed in the collisions were caught in the fire.

The carnage was indescribable. Of the 500 or so troops on the special train only 53 answered a roll call after the accident. Some 215 of the troops were dead and 191 injured. The exact number killed was never known since the men's records were burnt in the fire. In addition to the troops, ten civilian passengers were killed, two in the local train and eight in the sleeping car train plus the driver and fireman of the troop train.

Firemen from Carlisle took three hours to arrive at the remote scene of the disaster. Fanned by a stiff breeze, the fire spread rapidly - many passengers who escaped the worst effects of the collisions were caught in the blaze. The full horror became apparent at that tragic roll call of the troops - out of nearly 500 men, 446 were killed or injured.

The inquiry inspecting officer did not recommend the provision of new technology for added safety even though track circuits, which could have prevented two trains occupying the same section at once, were gradually coming into use. He felt it unreasonable to expect the Caledonian Railway to go to the expense of providing track circuits at locations such as Quintinshill where the layout was simple and the signalman had a good view of the trains.

The inquiry found that the accident was caused by inexcusable carelessness. Had the rules been correctly carried out the accident would not have happened. If the fireman of the local train had not left the signalbox to return to his train until he was satisfied that the safety procedures had been applied, the tragedy could have been avoided.

The immediate cause was that the local train shunted on to the southbound line was forgotten by the signalman even though one had just arrived on it. He failed to carry out the regulations for its protection.

The signalmen's attention was diverted at crucial moments mainly because they changed duty times without authority. This led to Tinsley copying movements into the train register in his own handwriting. They were convicted of culpable homicide at Edinburgh. High Court (there was no offence of manslaughter in Scotland), Tinsley received three years' hard labour and Meakin was sentenced to 18 months' imprisonment.

The fireman failed to implement fully the requirements of Rule 55 by neglecting to see that the signalman followed the protection procedure.

The signalman should have sent the 'Blocking back inside home signal' bell to Kirkpatrick, the signalbox to the north, and placed the block indicator at 'Train on line'. He should also have placed a lever collar on the southbound main line home signal lever to prevent him pulling it clear with the local train standing on the track beyond the signal. 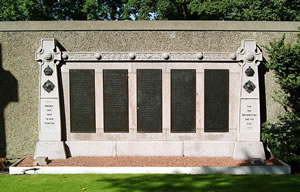 The remnants of the Battalion eventually arrived in Gallipoli on 13th June, where it took part in the attacks on Gully Ravine and Achi Baba, but it is ironic that the majority of those young men originally on route for Gallipoli, a place of which they could scarcely have heard, perished so tragically on home soil. The Quintinshill crash remains to this day the worst disaster in the history of British railways.

'From here, on the 22nd May, 1915 a troop train left en route for Galipoli. At Quintinshill near Gretna Green in the Borders, the train was involved in an accident with two other trains. Due to signalling errors a train standing on the main line was overlooked and the troop train was accepted and ran head-on into the stationary train. Fifty-three seconds later an express from the south ploughed into the wreckage. Fire added to the carnage and the result was the worst disaster in British Railway history - 227 people were killed and 224 injured. The bodies of the victims were buried in Rosebank Cemetery in Leith near Edinburgh with the funeral procession taking over three hours to reach the graveyard'